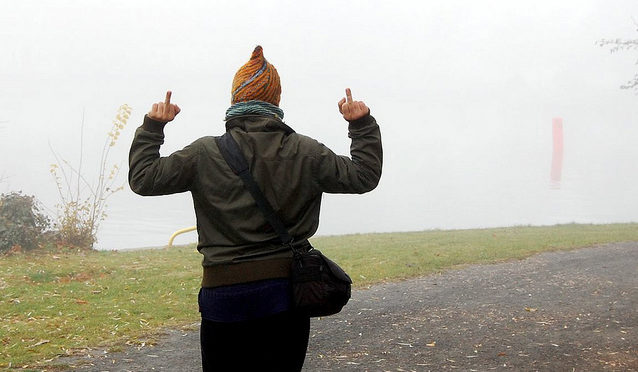 Almost a year ago, I met this amazing woman Jennifer Pastiloff. I attended her New Year’s Manifestation Retreat in Ojai and it was pretty friggin’ awesome and I can also say almost a year later, had a way bigger impact on me than I thought.

Don’t be an asshole.

I LOVE that she’s built a following on preaching this in her workshops and on social media because people can be real assholes. And I mean, there’s just no need for it.

I do not claim to be perfect. I’m pretty open about the fact that I can be a total BY-ATCH at times when I get triggered. I know I have a reputation for telling it like it is and sometimes doing it in a very no-bullshit “I’m not gonna sugar-coat this” kind of way, but I’m not an asshole.

I’ve learned from the best ones out there what constitutes just straight up assholeness and I just won’t do it. Cause it sucks.

I want to inspire people to do better. To be kinder to each other. To show up in ways that are honorable and full of integrity. To be mindful of other people’s feelings before they say and do things that are just plain old mean and hurtful.So here’s a little “How To” Guide on how not to be an asshole in your everyday life.  May it be of benefit.

1) BE KIND. It’s not that hard. Just be nice to people. Be polite when you’re in the grocery store. Offer a few words of encouragement to someone you know who’s having a rough day. Try to be patient with  your mother when she’s asking a million questions about how to work her new iPhone (this isn’t directed at anyone I know, I swear).Just be kind. Kindness goes a really long way in life and makes people want to be around you.

2) SHOW UP. Hard to believe, but this is a tough one for a lot of people. Showing up means being your word. If you say you’re going to do something, just do it. Don’t make excuses later for why you didn’t. Don’t even let it get to that point.

Be there for people. Be present. Give 100% of yourself when people need you. You have a friend going through a difficult time?  SHOW UP FOR THEM. Be there even if it means you’re gonna miss your favorite TV show that night or have to skip that Yoga class you were hoping to hit up after work.

Even if it means you gotta drive an hour to hold them after being up half the night yourself because they’re in a horrible depression (My best friend Elizabeth did this for me and I’ll never ever forget it.).

Put the phone down and skip out on surfing the internet if your kids want you to snuggle on the couch and watch “Frozen” with them again for the 100th time.  Just show up. People will always remember you did. And your kids will for sure never forget it.

3) BE HONEST.  Ok… I’m not saying when your best friend asks you if she looks fat and you agree she’s put on some weight you go ahead and say, “Damn girl. I was just thinking that!  You want me to look up some Weight Watchers meetings for you in the area?”

No. No. No. There’s a nicer way to not flat-out lie and be honest  but with a little love and compassion. Be honest with your friends when they’ve done something to upset you. Give them a chance to apologize and make up for it.

Be honest with your mother-in-law if her butting into the way you’re raising your kids offends you. She may not have any idea it upsets you so much.

And for Christ’s sake people, when you’re in an intimate relationship with someone, speak your truth. You’re feeling disconnected, pissed off, resentful or falling out of love with them?  BE HONEST. Too many people are blindsided when their partner ends up having an affair or abruptly ending the relationship because they literally had no idea that their partner wasn’t happy.  There’s just no reason to not be honest with the people closest to us.

4) DON’T START SEEING SOMEONE ELSE WHEN YOU’RE STILL WITH SOMEONE. So as not to be called a hypocrite by anyone, I did this once.  So I own that I was a total asshole and karma came back many years later to kick my ass.

Listen…it’s just not right. You want to be with someone else? Tell the person you’re dating or in a relationship with that you’re looking for something different and want to end it. Then end it.  Once you do that, you’re free to go do whatever you want with whoever you want to do it with.

I recently found out that the last guy I dated was clearly seeing someone else while still dating me (I recommend not looking at social media months later if you don’t want to find this stuff out). I understand that nobody does this kind of thing with the intention of hurting the other person but still it’s hurtful. Not to mention dishonest and disrespectful. Man up and just  don’t do it.

5) DON’T SPREAD GOSSIP.  I often hear people talking a whole lot of shit about people they don’t even know. I get it, it can be very tempting to jump on the bandwagon when others are talking about someone else and you want to throw your own opinion into the ring. But let’s extend the same courtesy to other people that we would want extended to ourselves. If you hear something personal about someone who you’re pretty sure they wouldn’t want repeated, then don’t repeat it. It’s just the right thing to do.

6) DON’T PUT OTHER PEOPLE DOWN. None of us is perfect. We’re all different. That’s the way God made us.  We have different political views, different religious beliefs, different cultural backgrounds, different ways of doing things, different lifestyles, different perceptions of the world and different views on how to raise our children.  Nobody’s way is the right way or the better way. It’s just a different way than ours.

So refrain from putting another person down for the way they dress, the fact that they work instead of stay at home with their kids or post things on social media you think are stupid. Everyone has a reason for doing the things they do, so just honor the differences and go back to #1 (BE KIND).

7) IF YOU DON’T HAVE ANYTHING NICE TO SAY, DON’T SAY IT. Yes.. I know I said to be honest with people just a few moments ago and I believe in that with all my heart. But being honest is not the same as being flat-out mean just for the sake of being mean. There’s a difference.

Yes, it may hurt to have to tell your husband that you’re not feeling attracted to him anymore because he’s not taking care of himself, but there is a loving way to say that to create an opening for a real dialogue about this without insulting him and blurting out, “I don’t want to have sex with you anymore because you’re a fat slob.”

I know you know what I’m talking about here. I’m referring to trash talking people when it’s not necessary. Are we going to have negative thoughts about people crop up every once in a while?  Hell yea!  Do we have to voice that negativity and put it out into the world?

Sometimes it’s better to just not be an asshole and keep it to yourself.

8) ABOVE ALL ELSE, BE YOUR BAD-ASS MOST AUTHENTIC SELF. Be you. You and only you. Stop trying to be what other people want or expect you to be.  Honor yourself. Be true to yourself. Be kind to yourself. Show up for yourself. Express yourself. Don’t apologize anymore for being who you are.   YOU ARE ENOUGH. Even when you’re not exactly where you want to be in this moment. Even if you’ve let yourself down in the past. Even when you’ve failed at something. Just don’t be an asshole and live your life trying to fit into some box the world has created for you when that box isn’t yours.

I’m sure at some point in the next few weeks, I’m going to commit one of the sins above myself. I might have a night where I’m half-listening to my kids because I’m on the computer and put off the snuggle fest. I might snip to my co-worker, “God, that person irritates the shit out of me.”  I think I may have said this just the other day so I’m not perfect either.

I may even have a day where I don’t show up in the way my friends have come to expect from me.

I’m human. I screw up. I’m an asshole at times too.

I just choose to write about it so people know that if they’re occasionally an asshole like me and aren’t perfect they have some guidelines to follow to get themselves back on track.