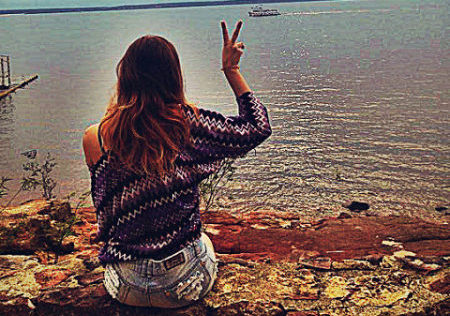 This week another round of layoffs happened at my company. Although we were expecting it, the emotional impact has been unwieldy.

I’m one of the lucky ones. I haven’t been laid off yet. I say yet because I’m prepared. I’ve already accepted it as if it’s happening sometime in the future and I’ve made the decision that I’m not going to worry about it or expect the worst if it does.  I’ve spent half my life worrying about things that never actually happened.

And the one thing that did… I survived it. And all that worrying about it possibly happening didn’t make it any less painful or shitty when I went through it.

So here’s what I’ve learned….

It’s just not worth it to worry about things we have no control over.

First of all… 98% of what we worry about never happens at all. Never. And those are pretty good odds.

Secondly, we waste needless time and energy that we could be putting towards something way more productive by worrying. Someone once told me that if I had channeled half the time I spent worrying about stuff into myself, I’d be a millionaire by now.  (Probably true).

And lastly, it’s not going to prevent the thing you’re worried about from actually happening so how about putting your focus into something else until you actually have to deal with whatever tragedy you’ve conjured up in your head?

I’ve stopped worrying about things because I believe we manifest what we focus our attention on. Our thoughts are incredibly powerful.  Whatever we’re thinking about happening is what we actually create.

But when I focused on abundance, love, having all of my needs met and being completely content with where I was at… guess what showed up?

I don’t bet against myself anymore. That’s what worrying is. It’s literally betting against yourself. It’s saying, “I’m not putting any money down because I’m going to lose.”

How about, “I’m surrendering to what’s happening because no matter what I’m going to win.”

How about, “What’s the best that can happen here because I know THAT’S going to happen!”

Whatever it is that you’ve been so worried about.

It takes the same about of energy to worry as it does to believe something great is about to happen.

So bet on yourself. Bet on things working out.  Throw everything you have into the pot. Put the worry aside and trust… with everything you’ve got that everything really is going to turn out OK.